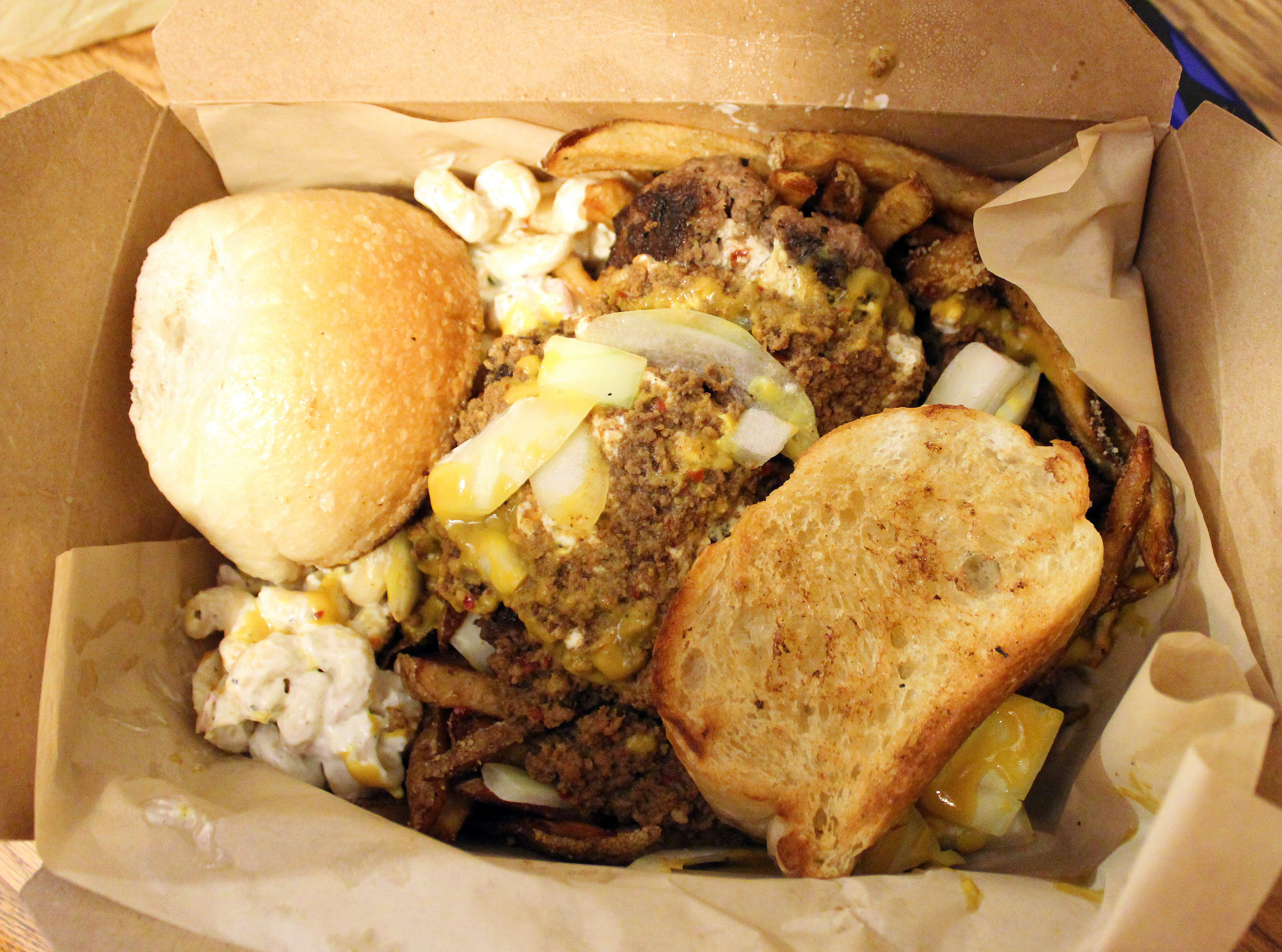 I had the opportunity to try the “drunken goat plate” a few days ago at The Angry Goat. Full disclosure: I should point out that I am a frequent guest at this establishment. So much so that when I called ahead, in an attempt to be sneaky; the person on the other end recognized my voice. So while I’m going to try my best to be impartial it behooves me to walk a fine line.

That said, add the drunken goat plate to my list of “Deluxe” plates; joining the ranks of Sticky Lips and Skylark. The Drunken Goat plate will cost you a whopping $15.11, making it the most expensive plate I’ve eaten thus far. Now I may be old fashioned but, ~15$ seems like a lot of money for a garbage plate. Is it a great plate? Yes. Is it $1.12 better than the Sticky Icky plate from Sticky Lips? I have to say no; it is not.

Based on the inspection, the Angry Goat handles their food properly and safely. The two violations they did have were minimal/trivial things.

The burger’s themselves were good. Not earth shattering; but solid enjoyable beef patties. They seemed hand made but that’s purely speculation. For their burgers they use a chevre instead of a normal cheese. I thought was a unique addition that made for an interesting taste profile.

The meat sauce was quite enjoyable and rather hearty; made for a good plate experience.

Once again it’s refreshing to see that restaurants are using [what I believe to be] hand cut fries. They also made a subtle step of throwing some garlic/Parmesan flavoring on them which I found to be quite good; but perhaps a bit decadent… even for plate standards.

I happened to like the mac salad that they use on their plates. Nice Al dente noodles which made for a good texture.

The bread here was outstanding. They went to the trouble of toasting it and it made for a perfect finale to an above average plate

What factors into the 4 they received was a couple of minor things. First, the price point was a bit off-putting. Why is this plate more expensive than at a sit down restaurant like Sticky Lips? Additionally, they serve the plate in these cardboard boxes lined with wax paper. The wax paper tends to disintegrate into your food. It’s a small detail that wouldn’t occur had I eaten there, I admit it. I try to grade everyone on the same scale using the same constraints. Even with these issues the plate was good enough that they earned a four in the composition category. For the best experience I’d recommend eating at the bar.