I recently went to Mark’s for a “sloppy plate”. I believe this was the first plate I ever ate; it holds a special place in my arteries. The nice thing about Mark’s is that you can get food there 24/7; I’m fairly certain I’ve eaten there on Christmas. Mark’s is also a bit of a throwback. At Mark’s I ordered the two cheeseburger plate with mac salad, french fries, meat sauce and mustard. One of the special things about the Mark’s plate is the mac salad. I maintain that Mark’s has the best mac salad. In any event, it took me ten minutes to receive my plate; which seems about right. The cost of the plate was $8.26 which makes it the cheapest plate I’ve eaten thus far. 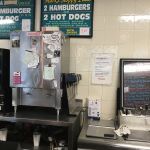 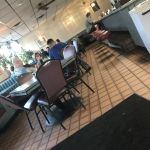 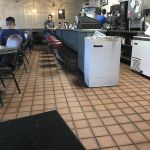 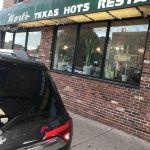 I recall when I was in college a friend came up to visit and we took him to Mark’s in the wee hours of the morning. After a night of heavy boozing and carousing Mark’s turns into the after party. Never in my life before or after had I seen people fall asleep at their booths. Or put their head on the table and sleep with a full plate in front of them. It was dinner and a show. In any event; let’s talk plates; here’s what I ordered:

The burger meat was cooked through; it was bland and a bit rubbery. Nothing special. Whatever cheese they use tends to get a bit slimy; I’m not sure if it’s a wiz they’re using but it’s sub-par.

The meat sauce here is good; I wish I had gotten more of it. It isn’t spicy like Tahou’s but it has a distinctive flavor that leaves you wanting more.

I like Mark’s fries; they’re crinkle cut and they aren’t overcooked.

The mac salad at Marks is the best mac salad on any plate; in the city as far as I’m concerned. They are the reigning mac salad king. They almost overcook the macaroni so it’s super soft and they use egg whites in there as well. It makes the remaining parts of the plate very enjoyable.

Despite the fact that the bread was fresh; it was bland and tasteless. I couldn’t even finish the second piece because it was so starched and bland.

Mark’s gives you a ton of food; it’s almost too much. One of the things I like about this particular plate is that it isn’t greasy. I could have used a bit more meat sauce but other than that everything was spot on. The mustard that they use tastes like French’s or something similar. It can be a bit overpowering and detracts a bit from the plate.

This is one of my favorite plates in the city. I don’t think that Mark’s doesn’t get the respect they deserve (from a garbage plate perspective). And the best part; they’re open 24/7 :).