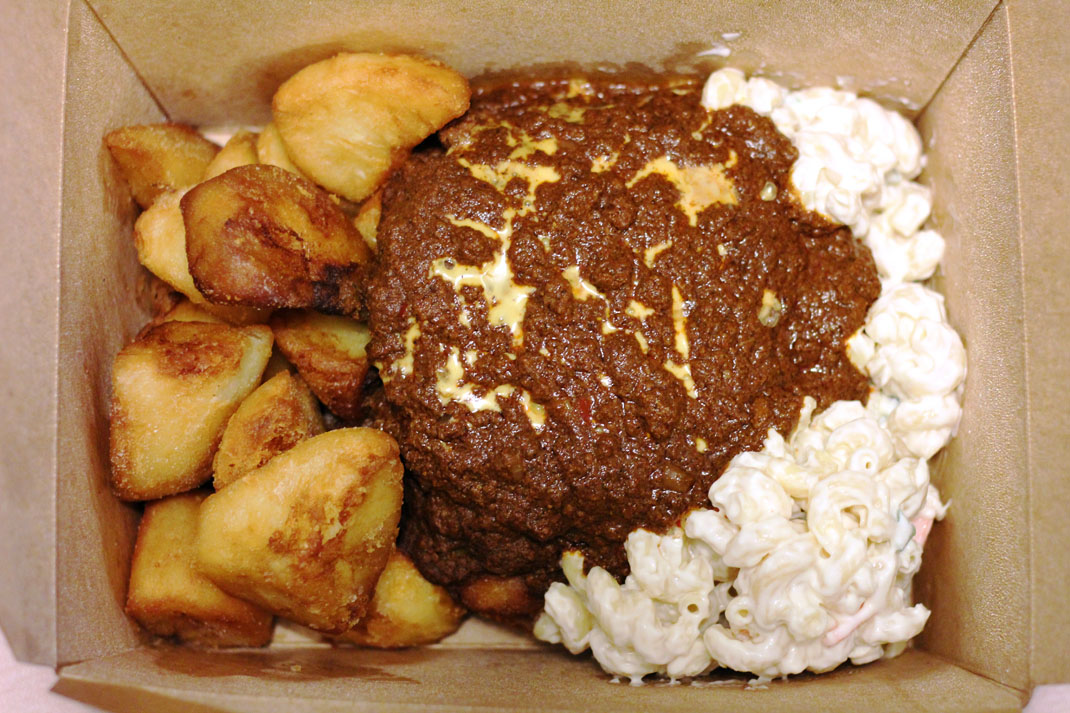 Welcome back, I finally had the wherewithal and foresight to get a plate from Superfly DMC. They only offer their plates on Thursday nights, so this required a bit of planning on my part. For $14.04, you can get their version they call “Like Spinning Plates”.

They had two non-critical violations based on an inspection from February, 2020. Based on this report, I’d feel comfortable eating here again.

This is one of the better burgers that I’ve had. It wasn’t one of those hockey pucks, I think it was made in house and tasted great. It was cooked well and the cheese they use has a good texture.

The meat sauce here, how to describe it? It’s different. One of the things that stood out to me about this plate was how unique it was. They use some South-Asian spice that I couldn’t quite put my finger on. I didn’t love it initially, but it eventually grew on me. I’ll also add that the meat sauce has a good kick to it. The texture was good, but the taste was unusual, and different. Which isn’t necessarily a bad thing.

The fries here are almost like samosa’s. They’re these huge globs of potato that appear to be deep fried. I hesitate to say that they’re too big, but I quite liked them. They tasted awesome. I should mention that they were over-salted. Had it not been for the over salting of the fries, this could easily be a five.

The mac salad was too mayo heavy for my personal preference. It also was a bit bland to boot. This made it a bit of a slog when I was getting to the end of the plate.

I was expecting the typical roll that you get; but boy was I in for a pleasant surprise. The bread was on the mild side, but it was enjoyable. It was also fresh tasting and paired well with the plate.

They give you a ton of food for your money. So much so, that I had a tough time finishing it. It’s also worth nothing that the plate itself is heavy, and the ingredients are a bit decadent. There’s good plate synergy, but the mac salad was a bit overwhelming at times.

This plate was a breath of fresh air for me and I liked this plate because their plate tasted completely different from anything I’ve had before. Despite my initial reservations about this place; it’s worth checking out, even if only for the fact that it’s such a unique tasting plate.