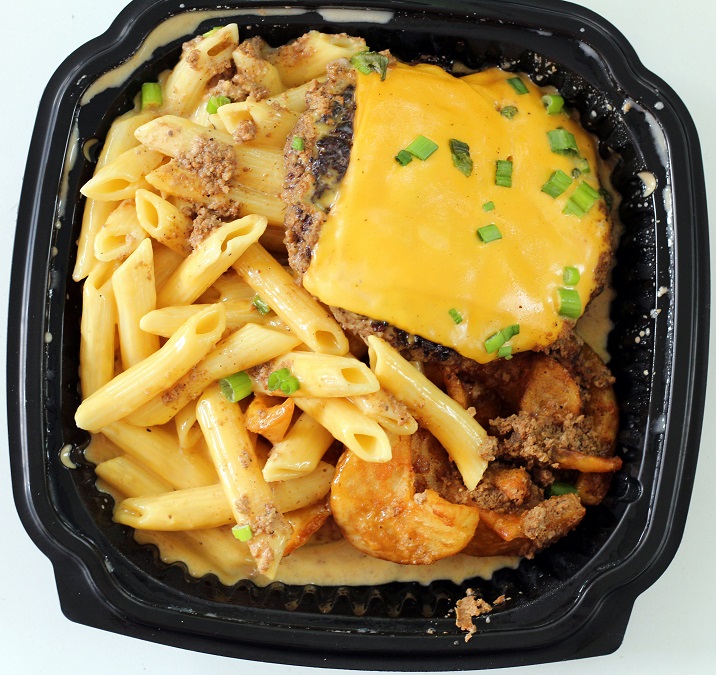 I had the chance to check out Blu Wolf Bistro last weekend. A friend mentioned that they had an offering that I should try. When I arrived the place was bustling with activity; which is always a good sign. For a whopping 16.20$ you can get their version of the plate. This is the most expensive plate I’ve reviewed thus far. Could this hefty price tag mean that we have a new “best of”? Spoiler alert:

In any event, here’s a photo of the plate I received, please note the lack of meat sauce:

I expected that this section would be empty. I expect that popular places on Park Ave don’t suffer from the same indignity’s of other smaller, less established restaurants. Wrong. From an inspection dated April 14, 2018, they had 14 “minor” violations. In the past I have deducted a full point from the “portion and composition” score for the following violation:

Cooked or prepared foods are subject to cross-contamination from raw foods.

As I did last time, I’ll go ahead and share this fun video:

Gross. I am deducting one full point from their “portion and composition” score.

When I placed my order, the bartender asked me how I wanted the burger cooked. I asked for medium, what I received was a well done burger. Fuck me right? I wouldn’t be so upset about this if they hadn’t asked me how I wanted the burger cooked. I’m not one to complain about well done vs medium burgers. If I’m paying 16 dollars for a plate, the least they can do is prepare it the way I request. That’s the bare minimum level of service I expect to receive.

You’ll notice from the plate photo above that they gave me a paltry amount of meat sauce. From the photo above you’d almost think I ordered a burger with Ziti. And they threw in some chives to make it look fancy. From what little meat sauce I had there I enjoyed it. I only wish they gave me more :\.

Without a doubt, the best part of this plate were the fries. They make them in house and they are divine.

I’m going to put this out there, I don’t like macaroni and cheese on garbage plates. In general I find that mac and cheese is a more subtle flavor. So invariably the plate tends to taste like spicy meat with bland pasta. I’ll also speak about their choice of noodle here for a second:

How dare you serve me Ziti like I’m some cafone not worthy of a finer noodle.

I’m glad I was able to get that off my chest. Ziti has NO place in plate. Additionally, who the fuck wants Ziti-macaroni and cheese. This abomination is not what the general public have been clamoring for. There are two times when I want to see Ziti:

That said, the mac and cheese itself was in a word: meh. It was boring Ziti, in boring cheese sauce. A bit greasy, but otherwise remarkably unremarkable. Also here’s a meme: 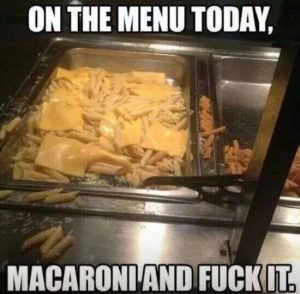 I did not receive any bread with my order.

This was initially a two until I read the *health inspection notes. This plate was a disaster from start to finish. Let’s recap:

The whole thing was an affront to the plate experience and was one of the worst plates I’ve had to date. And to think, for the low low price of 16.20 you too can receive such a plate.