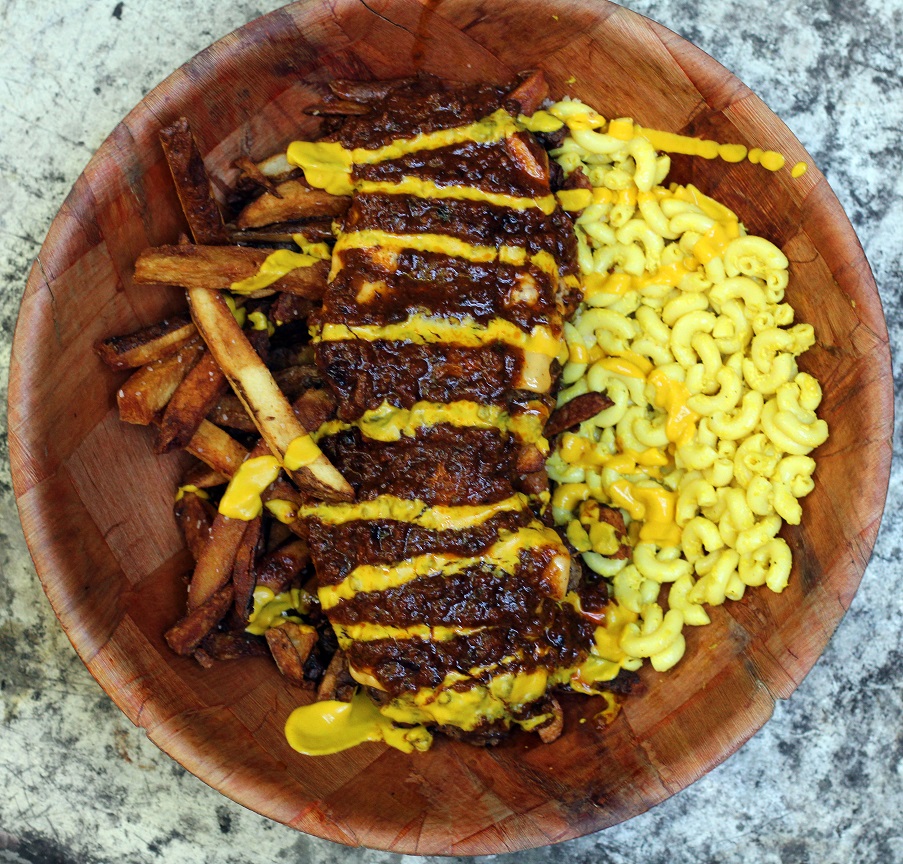 For the next two weeks I’m going to be taking my review game on the road.

If you’re craving a plate or other culinary staples of Western New York, then there’s a home for you in Brooklyn. Buffalo’s Famous serves up an array of WNY staples including: Garbage Plates, Chicken Finger Subs and Beef on Weck. My focus is going to be on the garbage plate selection. That said I had a friend from Buffalo who tried the beef on Weck and said it was enjoyable. The staff are great and the chef is awesome. He went to the trouble of coming over to us to ask us about our experience after our meal was over. If you want to catch a Bills game in NYC with traditional WNY fare I’d recommend trying this place out.

For 14$ you can get the “Famous Plate” from Buffalo’s Famous. I ordered mine with two cheeseburgers and mac salad. It’s hard to gauge the size from the photo below but this was a MASSIVE amount of food. So much so that I couldn’t finish it (more about this later). This review is a bit different from other reviews I’ve done in the past. I ate the plate in the establishment (instead of taking it to-go). While my general preference is to take the food to go on this particular occasion I was eating with friends.

I had to pull up a different site but NYC makes it easy to find their inspection notes. Unfortunately, the most recent inspection was from August 2017. This inspection happened before they moved to their new location. I’m hesitant to use a year old inspection but it’s all I have to go on. They were given a “B” by the health inspector:

Suffice to say, it’s hard to give this inspection much weight. I will note that the final “Sanitary Violation” is concerning.

The patties appeared to be hand made which is a plus. That said, they were a bit rubbery and less juicy than I would prefer but otherwise they had a good flavor to them.

The meat sauce had a good heat to it, I’m always a fan of good meat sauce and theirs was spot on.

It’s always nice to see people taking the extra effort to make real fries. The fries themselves were quite good. Initially, I had this review as a 4 in retrospect I have adjusted my rating to a 3. Why? The fries were over-salted. You can see the big grains of salt in the photo.

It’s like they used Morton’s Kosher salt to season their fries. Towards the end of the plate, it was so salty that I couldn’t finish it; it was inedible.

A real disappointment. I had the chance to speak with the chef and he was beaming about how he felt they nailed the mac salad. I must disagree. The mac salad was a bland affair that was drab and tasteless. You can see it in the photo; there is almost no seasoning and they went super light on the mayo. It’s basically noodles.

I did not receive any bread with my order.

Perhaps I’m being generous with this section. There were a couple of issues here: the amount of salt on the fries, and the bland mac salad. There was also an issue with portion control on this plate. As far as I’m concerned the point of the plate is not to overwhelm someone with a massive amount of food. There was far too much mac salad and the bowls they use to serve the plate are large popcorn style bowls. I’ve noticed this psychological trick when I order food at Chipotle. When I order a “burrito bowl” they give me far more food as they are trying to “fill the bowl”. It’s a human thing. We see an empty space and we try to fill it. In this case the effect is that they filled the bowl; and the bowl still wasn’t full.

All that said, if you’re looking for a solid plate in NYC, this is the place to be.