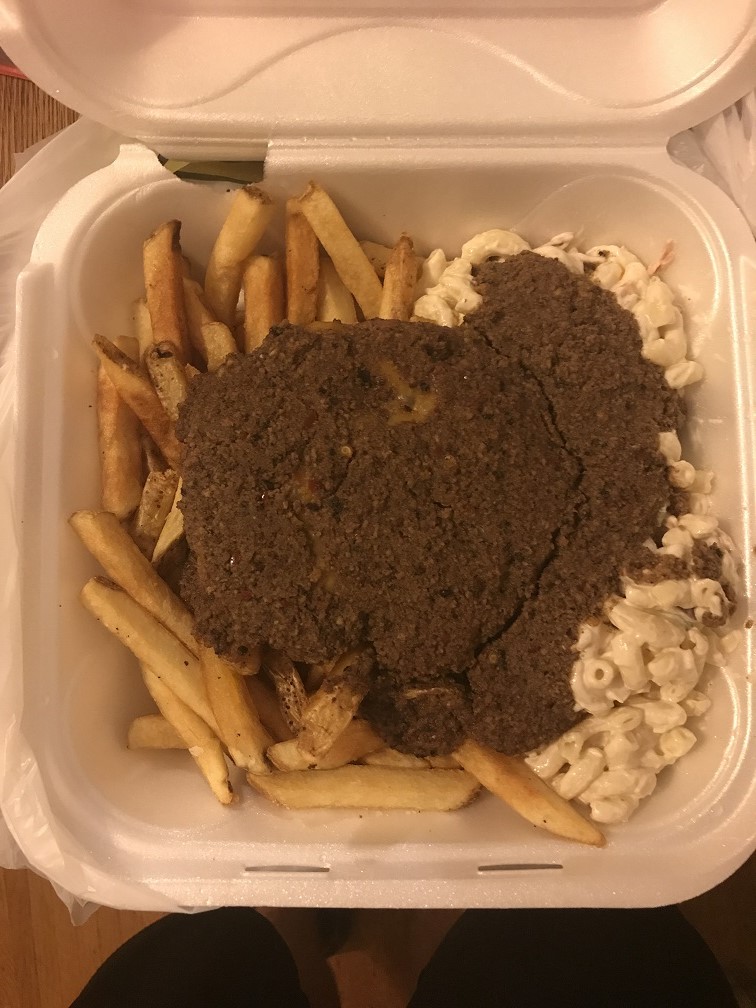 This past weekend, I decided to try Bunga Burger Bar for a plate. I haven’t eaten a plate for a while, so I decided that to maintain this blog I’d venture out for one. I’ve tried the majority of “staples” around town. So, I figured now would be a good time to pick up all the odds and ends places that have plates.

The “Bunga Plate” will cost you $11.25 which makes it the most expensive plate I’ve ordered thus far. Here’s what your eleven dollars and twenty five cents will get you:

I thought the plate was rather mediocre; if not below average. Considering the high cost of the plate, this may be one of the worst plates I’ve reviewed thus far. For the first time since starting this blog, I was unable to finish my plate. You read that correctly, I’ve encountered a plate that I couldn’t finish. I attribute this to a couple of things:

Additionally the flavor profile for the plate was a bit odd; it was rather salty. I thought that maybe they over-seasoned the fries. Then I realized that it was probably the burger or the meat sauce. It tasted like when you use Morton salt instead of a finer ground salt and the food just tastes like salt. I don’t have any real explanation for this; the plate was salty, greasy and rather bland.

Let’s break it down:

Nothing particularly spectacular. A bland sauce that didn’t have any important defining characteristics or taste profile.

The fries were good; although they were also rather greasy. It’s possible that this was the main source of grease for the plate. The grease I found looked like oil that wasn’t properly drained from the fries.

I was pleasantly surprised by the mac salad; it wasn’t too heavy on the mayo. This was one of the better parts of the plate.

There is no bread served with the Bunga plate.

They lost points here because of the salt/grease. I’m not going to belabor the point, but it was enough of a problem for me that I felt gross after eating it. Which is VERY unusual. I don’t normally feel lethargic/gross after eating plates. This should be a tip off that something isn’t right here. What I will say is that they give you a ton of food for your 11.25.

One of the worst plates I’ve had thus far. Scoring below average on every category except the mac salad. I’d recommend hitting up somewhere else if you want a plate. You can get better/cheaper plates elsewhere.