Ah Henrietta Hots; the finale of many of my college nights filled with debauchery. As an RIT student I remember many a night spent on line waiting anxiouslyto stuff my face.

They’ve changed the layout and decor of the place since I was in college. I was reading on the wall that this change took place in 2013. I’m not a fan of the new layout. It looks like they started working on it and decided to stop half way through. I miss the old booths. The decisions they made to have stand-alone tables probably makes more sense. I can’t imagine having to clean under a booth; that must have been awful. 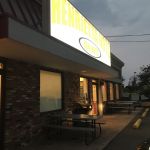 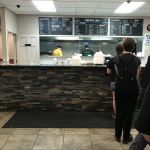 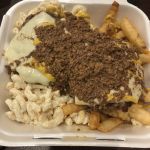 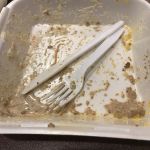 Enough nostalgia for now; let’s talk plates. Henrietta Hots is located (as the name would suggest) in Henrietta by the marketplace mall. The cheeseburger plate will cost you 8$. I didn’t remember that they have a giant vat of pickles sitting on the counter for all to enjoy. I liked this touch; it’s a nice lagniappe you can enjoy while you’re waiting for your entree.

The plate I received was one of the greasiest plates I’ve had thus far. After completion of the plate it looked like a scene from the Exxon Valdez oil tanker spill. Let’s break it down:

The cheeseburger here was good; it was one of the finer points of this plate.

The fries were also rather mediocre. If you like your fries on the crispy side this is the place for you.

One of the weird things about this plate was that the mac salad was cold. Like it had just come from the fridge cold. I suppose that’s fine but it was a weird juxtaposition to have something that cold in your food. To speak to the taste; it was boring, drab, etc.

I didn’t receive bread. I’m sure this was merely an oversight but I’ve decided to deduct a quarter point from the score. I don’t recall the bread being anything special.

Too heavy on the mac salad and not enough fries is the main culprit for the low score here. They give you a healthy portion but composition was less than stellar.

While this plate wasn’t as bad as the rating would suggest (a bread penalty was issued), there are places I’d rather go. Henrietta Hots is a flag bearer for mediocrity.